The third and last Textlab week in June seemed to run more smoothly than the previous, as the team had gotten more used to the form of working through Zoom.

> Watch a film documenting the process of Textlab by clicking here.

> Watch a selection of scenes from the work made during Textlab. 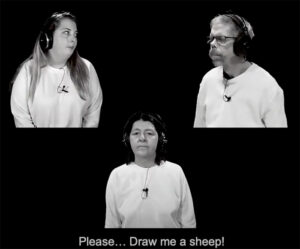 During an evaluation meeting at Moomsteatern the team agreed that were we to do Textlab all over again we would have made these changes:

Harald Leander summed up his reflections on the project as the learning process truly being the important thing in the project. That the most interesting thing has not been the artistic result, but rather the process in getting there. He made changes and adjustments along the way. Like for example, his plan was to go more into detail in his directing the actors, to make many more re-takes in the recording, but he soon realized that meant that the actors lost their energy, so he changed his approach and let them roll along with the script instead.